KATHMANDU: Canada became the first major economy to fully legalize recreational cannabis. While the cannabis industry’s economic contribution to the Canadian economy is currently relatively small a year on, the domestic cannabis industry continues to grow rapidly and Canadian cannabis companies are poised to gain a sturdy foothold in an international market, which is currently valued at USD 100 billion and will be worth USD 194 billion by 2025 according to an estimate by Deloitte.

The Canadian government utilized their history regulating industries like alcohol to create a legalized and regulated recreational cannabis market. Policymakers around the globe will now likely be observing and determining the viability of a legalized cannabis market in their respective countries.
Although increased competition threatens Canada’s position as a first-mover in the international arena, it is also potentially a lucrative opportunity, allowing Canadian cannabis companies to partner with foreign businesses and capture market share in growing licensed international markets.
As it stands today, Canadian companies are able to legally tap into capital markets, receive bank loans and investment to grow. Conversely, the United States—the largest cannabis market by far—bans companies selling cannabis to U.S. consumers from tapping the same resources, handicapping their domestic industry.
Fundamentally, Canadian businesses are consequently better equipped to enhance quality, patent technology and products, collect data for consumer behavior and perfect the supply chain for cannabis and cannabis-related products.
Whether it be either having access to a skilled labor market, a large consumer base or funding, companies operating in Canada have a significant advantage. The future success of the Canadian cannabis industry largely depends on how efficiently Canadian companies’ can leverage their upper hand in accessing capital, attracting talent and securing patents to capture the lucrative global market. Nevertheless, legislation and technology around the world will likely quickly adapt to a rapidly growing industry in an attempt to win market share. 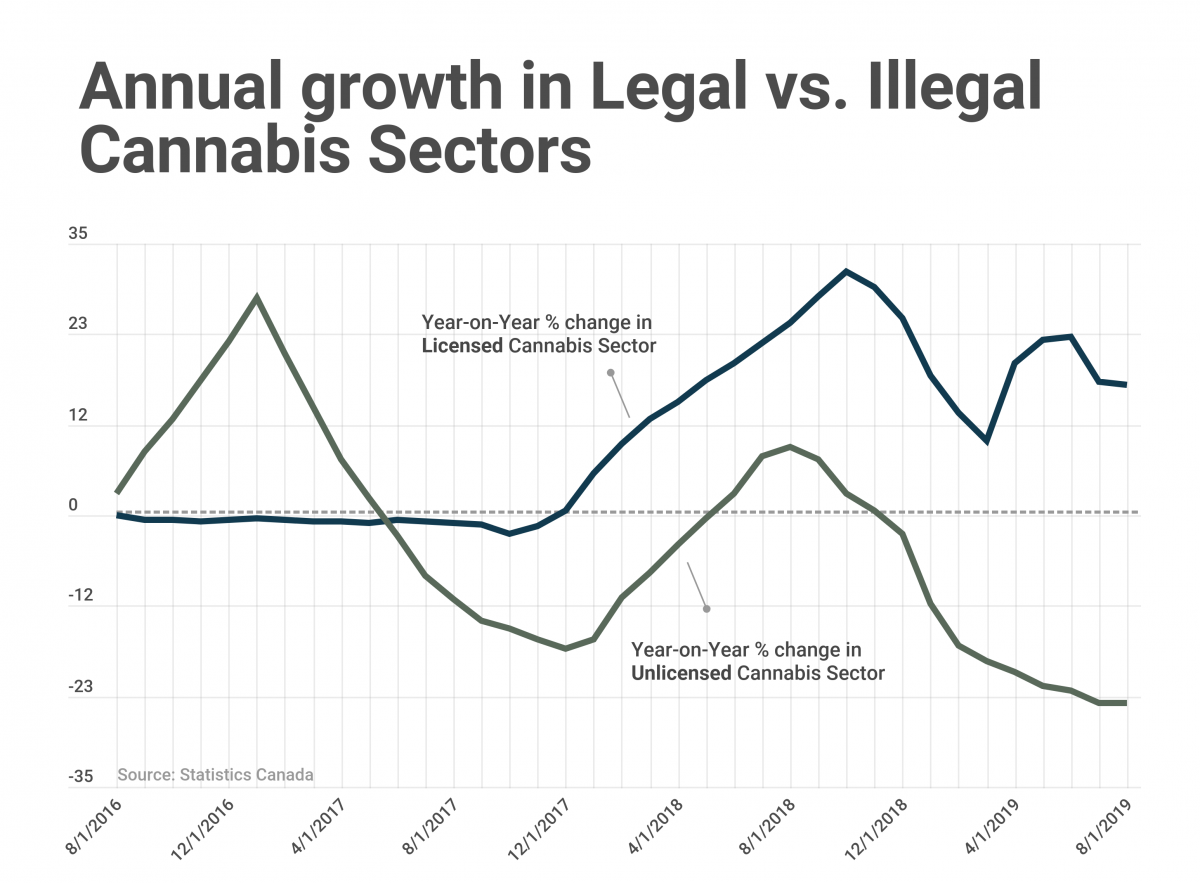 It is thus imperative that Canadian cannabis companies make the most of their first-mover advantage. Ultimately, the biggest achievement for Canada by legalizing cannabis will come from the positive economic opportunities and benefits for the country. The industry must also work with policymakers to provide strict but also business-friendly regulation to ensure businesses can thrive and consumers are protected.

The Domestic Market
Canada’s combined domestic medical and non-medical cannabis market is projected to be worth approximately CAD 2.6–6.1 billion a year, dwarfing Canada’s maple syrup industry and not far from what Canadians spend on wine in a single year—CAD 7.5 billion in fiscal year 2017–2018. The licensed sector has been growing quickly and for the past few years institutions and individuals have been, and largely still are, jumping on the bandwagon to become early investors. According to Statistics Canada, the cannabis industry produced CAD 8.0 billion in the month of June 2019, up from the CAD 7.0 billion in the month of October 2018 when cannabis was legalized.

That said, the non-licensed cannabis market still makes up the lion share of consumer purchases. As of June, the illegal market represented roughly two-thirds of the cannabis sector. A major reason why consumers are still purchasing cannabis on the black-market economy is likely due to lower prices: A licensed retailer will find it difficult to compete with the black market due to taxation, higher labor costs, quality control and packaging all putting upward pressure on licensed cannabis prices.

Nonetheless, the black market is losing considerable steam, despite flagging price estimates for unlicensed cannabis. Looking at quarterly data, the size of the illegal market has fallen sharply since legalization. Meanwhile, the legal cannabis market has posted healthy quarter-on-quarter growth rates in the first half of 2019.

This trend will likely continue in the coming quarters, especially since the federal government legalized alternative cannabis products on 17 October 2019. Deloitte believes that edibles alone are worth approximately CAD 2.7 billion annually, which better target consumers who are relatively new cannabis users adding further impetus to the licensed market. Furthermore, prices have continued to increase for licensed cannabis since legalization, which may suggest consumers are valuing quality assurance over cost savings when it comes to purchasing cannabis.

Domestically, the cannabis industry also creates an abundance of employment opportunities in different sectors of the economy. The industry creates jobs in the agriculture, manufacturing, distribution, retail and services sectors. The federal government has put in place a strict application process used to ensure the legitimacy of licensed suppliers. As it stands, there are nearly 200 federal licenses issued allowing businesses to operate along the supply chain as cultivators, processors and sellers.

Growing the legal market will not only boost job creation and business investment, but government revenues as well. Government revenues has brought in hundreds of millions of dollars in revenue since legalization, thanks to excise duties, business taxes and sales tax.

While estimates vary, the total size of the global cannabis market likely runs into the hundreds of billions of dollars, when taking into account spending on cannabis and cannabis-related consumer products. Nevertheless, the legislation still needs to catch up with growing demand, which will continue to constrain the global market. The North American market is likely the largest market worldwide: Legal cannabis in the U.S. is already a multi-billion-dollar market where, like in Canada, the lion share of that is accounted for by illegal sales.
Governments around the world are increasingly in favor of some sort of legal framework to regulate and restrict the sale of medical and non-medical cannabis. Going forward, a number of nations will likely take a wait-and-see approach to study and observe how the market unfolds in Canada, given it was the first nation in the G7 to legalize recreational cannabis at the federal level.
Canada is in a strong position to leverage its legislative advantage and to build a framework for managing and settling international transactions.
As a result, Canada is home to companies such as Canopy, the largest cannabis company in the world in terms of market capitalization, which are innovating and aiming to penetrate other consumer product markets, pushing the versatility of the commodity and consequently creating a larger global market for cannabis and cannabis products. Canada thus seems poised to remain at the forefront of the market even as legislation in other countries evolves.

Although the number of public cannabis companies listed on the Canadian stock exchange is consistently growing, the Canadian cannabis market is still dominated by a few big players: Canopy Growth Corp. and Aurora are the two largest companies on the Toronto Stock Exchange (TSX) by some distance, followed by Aphria. There is also an increasing amount of consolidation as the market slowly matures. For instance, in 2018, Aurora purchased MedReleaf for approximately USD 2.5 billion, the largest M&A deal in the cannabis industry to date.

On 17 October 2018, Canada became the first major economy to fully legalize recreational cannabis. While the cannabis industry’s economic contribution to the Canadian economy is currently relatively small a year on, the domestic cannabis industry continues to grow rapidly and Canadian cannabis companies are poised to gain a sturdy foothold in an international market, which is currently valued at USD 100 billion and will be worth USD 194 billion by 2025 according to an estimate by Deloitte.

The ability for these companies to merge, allows them to attract international investment, benefit from economies of scale and penetrate global markets, which will benefit the Canadian economy ahead. By creating new products, acquiring brands and scaling production, these companies are able to gain a comparative advantage over international competitors. However, the window of opportunity is closing quickly as large U.S. cannabis producers are also listing on Canadian capital markets, bringing their industry expertise and innovation with them.

Aurora operates in 25 countries and is experiencing tremendous growth by becoming a leading supplier in medical cannabis across Europe and South America. To date, Aurora has served tens of thousands of registered medical patients and is tapping into global markets and making the most of its early-mover advantage and innovative products. The company has identified opportunities for medical products such as oils, gels, and dry flower cannabis, as well as higher-margin goods such as infused beverages, wellness products and vape pens. The company currently holds a foothold in Germany’s medical market—the single largest federally legalized medical cannabis market.

Meanwhile, Canopy Growth, the global market leader, has also benefited from Canada’s push to legalize recreational cannabis over the last couple of years. The company is operational in over 12 countries. Canopy Growth recently received a USD 5 billion investment from Constellation Brands to develop and grow their cannabis-infused beverage market. Canopy holds 90 patents and is looking to tap into a variety of consumer products such as animal health products, pain and anxiety relief, athletic drinks and health and wellness products. The company has a market capitalization of close to CAD 10 billion and continually leverages its first-mover advantage and expertise in penetrating global markets.

A number of smaller Canadian cannabis companies are gaining international exposure too, as encapsulated by Aphria, another Canadian cannabis company with global ambitions. The business currently sells medical cannabis in over 10 countries and strategically positions itself to tackle recreational cannabis markets in those countries. Moreover, Auxly Cannabis has recently partnered with the British-based tobacco company Imperial Brands. Imperial Brands will license their vaping technology to Auxly, and the capital injection will also allow Auxly to continue developing new products and technologies with hopes of expanding into global markets. Finally, Tilray has joined forces with Budweiser Brewery to tap into the cannabis-infused beverage industry as well. Partnering and investing with multi-internationals will only provide the Canadian cannabis industry with better strategies and infrastructure for targeting international markets.

What started as the Liberal’s campaign promise, designed to limit cannabis-related criminal offenses and to better restrict youths from purchasing cannabis on the black market, has become a booming new industry. As Canadian companies, regulators and consumers come together in the domestic market, policymakers around the globe will be observing and determining whether a domestic Cannabis industry is a possibility in their respective countries in the foreseeable future. Both the public and private sector will most certainly experience growing pains in the medium-term, with respect to keeping society safe and ensuring prices and supply can support companies and consumers.

Canada’s cannabis companies have a great opportunity to lead the global cannabis market and policymakers must find a balance of regulation that keeps its citizens safe, while not stifling innovation. Possessing the technology and intellectual property rights involved in processing and testing cannabis and cannabis-related products will likely provide the biggest first-mover advantage for Canadian companies. Canadian businesses are thus well equipped to supply global markets, utilizing their degree of expertise and sophistication required to operate in a sensitive industry like cannabis.

Going forward, this will likely provide a boost to Canada’s external sector, while spilling over into other industries like agriculture and manufacturing. Ultimately, regulating and administrating cannabis, as well as unveiling the technology and tools to provide quality products at a low cost, will likely expand the market and unlock more profitable opportunities for Canadian companies.

Steven Burke, an Economist from Canada