KATHMANDU: Ranipokhari and Durbar High School, the two iconic monuments in the heart of the capital, have been finally restored to their previous glory after they were badly damaged in the April 2015 earthquake.

President Bidhya Devi Bhandari inaugurated the reconstructed structures and handed them over to the concerned authorities amidst separate functions held today. She also unveiled bronze plaques installed at the reconstructed facilities.

On the occasion, President Bhandari held a prayer ceremony marking the installation of the newly-reconstructed Balgopaleswar Temple which lies in the middle of the historic pond and also offered holy water at the pond.

Addressing the function, President Bhandari said that Ranipokhari has been rebuilt in its original style, look and technology, despite facing various hurdles and challenges.
She also expressed her satisfaction with the National Reconstruction Authority (NRA)’s integrated master plan to develop Ranipokhari area, including Ratna Park, KhulaManch, Tundikhel, Bhrikutimandap and Dasharath Stadium. “The master plan, along with the under-construction Dharahara area, will provide people in Kathmandu with an extensive open area,” she stated.

In his welcome address, Chief Executive Officer of NRA, Sushil Gyewali, informed the august gathering about the various aspects of the post-earthquake reconstruction activities, including rebuilding of private houses and heritage sites.

“We are working to complete the retrofitting of the main façade of Singha Durbar,” he said, adding, “We plan to complete it for the Prime Minister’s Office to shift to this new site by mid-December.” He also informed that the main structure of the 22-story Dharahara will be completed by early next year.

The reconstruction of Ranipokhari was carried out under the aegis of the local users’ committee while the construction of the Balgopaleswar Temple, the bridge and the beautification works were completed through the contracting company.

Besides involving the local community and cultural experts, traditional artisans from Bhaktapur also contributed significantly in rebuilding the basement of the pond.

A total amount of Rs 280 million was spent on the reconstruction of Ranipokhari and Balgopaleswar Temple.

Originally known as NhuPukhu (New Pond in Newari), Ranipokhari now wears a new look with the Balgopaleswar Temple in the middle of the historic pond built in Malla-era style called Granthakut or Shikhar more than 350 years ago.

The massive earthquake on April 25, 2015 damaged the temple beyond repair. President Bidhya Devi Bhandari laid the foundation stone of the reconstruction of Ranipokhari on January 16, 2016.

Almost two years after the foundation stone was laid, the Kathmandu Metropolitan City formed an 11-member expert group under the leadership of Bishnuraj Karki, former director general of the Department of Archeology. This group suggested rebuilding the Balgopaleswar Temple in Malla-era style.

The concerned group meeting chaired by the then minister for culture, tourism and civil aviation, Rabindra Adhikari, decided to rebuild the temple in Shikhar or Granthakut style.

As the reconstruction got delayed due to various issues and concerns raised by the local community and culture experts, the government handed over the responsibility of rebuilding Ranipokhari to the National Reconstruction Authority (NRA) on January 28, 2019. Soon after, the NRA formed a five-member users’ committee under the leadership of Ajay Ratna Sthapit to construct the basement and the inner wall to hold water on March 2, 2019.

Similarly, NRA signed an agreement with CA/Tulsi Construction JV on July 9, 2019 to construct the Balgopaleswar temple and the bridge. The Gajur, pinnacle or spire, was installed on the temple on October 1, 2020.

Durbar High School, the country’s first school, has received a major facelift after workers from Nepal and China worked hard to rebuild the school facilities under the financial assistance of the Chinese government.

The old infrastructure of the school, which was established by the Rana regime in 1854, was already in a dilapidated condition and could not withstand the April 2015 earthquake.

Though the Rana regime built the school to provide quality education only to their children, then Prime Minister, Dev Shumsher Rana, opened the school for the general public in 1901. 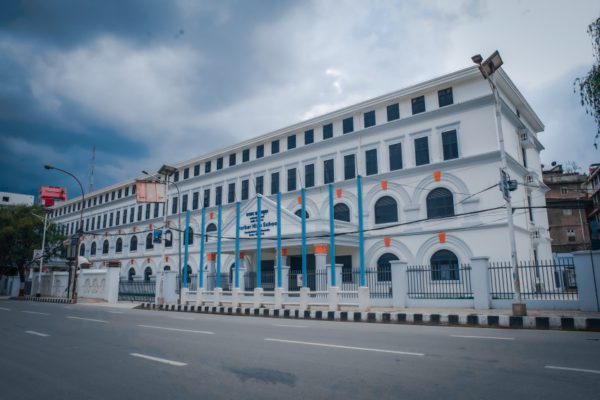 However, along with the development of the education system in the country many more schools with better facilities began to crop up. And, Durbar High School, which did not have proper facilities, became a school for children from poor and deprived families.

However, the historic school has now been rebuilt with all the necessary modern facilities and the government hopes to improve the education standard in the school.

The Chinese government has spent around Rs 900 million to rebuild the school in which 1,000 students can be accommodated now.