KATHMANDU: The government has lifted the ban on land plotting (allotment) that had been in place for the past three years. Minister for Land Management, Cooperatives and Poverty Alleviation, Padma Aryal, has taken a policy decision to lift all types of bans on land plotting by lifting the previous decision.

Gopal Dahil, then Minister of Land Management, Cooperatives and Poverty Alleviation (MoLMCPA), had imposed a ban on allotment of land to prevent the subdivision of agricultural land on August 10, 2017.

Secretary at the ministry,Teknarayan Pandey, informed that the ministerial meeting held on September 3 decided to revoke the earlier directive and allow plotting of all types of land.

“The ministry has already lifted the ban on allotment of land,” Pandey said, adding, “The decision to allow allotment of land has been made within the scope of the Land Use Act, 2019 and the prevailing law.”

The new Land Use Act has categorized land into different categories based on its characteristics and needs. The local levels have set their own criteria within the classification made by the same act.

Pandey said that arrangements have been made to plot land within the criteria of the local level and the prevailing law. 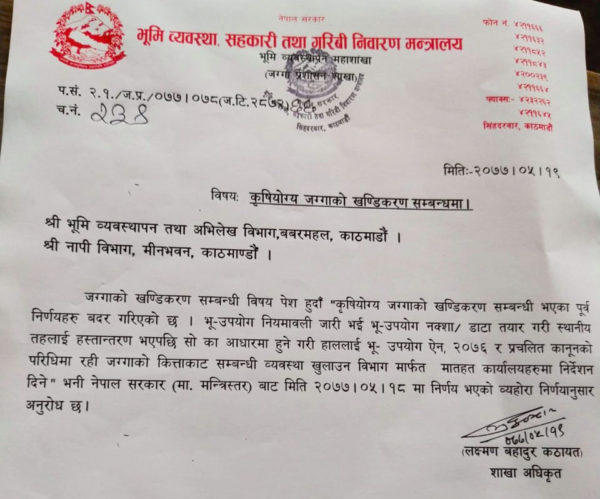 After the issuance of the Land Use Act, 2019, the land use regulations to implement the act have not been issued yet. The draft regulations have been stuck for the past six months at the Office of the Prime Minister and Council of Ministers.

The MoLMCPA had written to the Department of Land Management and Records (DoLMR) and the Department of Survey on September 3, stating that the previous decisions regarding land fragmentation have been reversed.

The letter has stated that ‘Previous decisions regarding subdivision or allocation of agricultural land have been reversed’. ‘After the issuance of land use regulations and preparation of land use maps/data and handing over to the local level, instructions will be given to the subordinate offices through the department to open the land allotment system within the scope of the Land Use Act, 2019 and the prevailing law’.

Earlier, the Commission for the Investigation of Abuse of Authority had directed the ministry to relax the provisions on plotting of land, stating that widespread irregularities had increased in the Land Revenue Offices and Survey Offices across the country and landowners were being harassed.